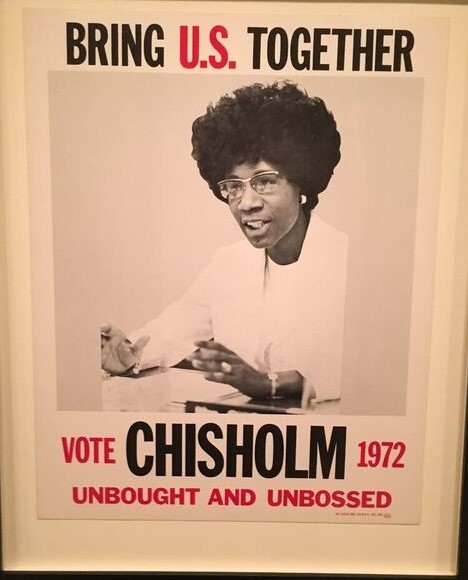 Shirley Chisholm was elected to the U.S. Congress in 1968. She ran against civil rights activist James Farmer. She quickly became known for her work on minority, women’s, and peace issues. She represented 12th Congressional District, New York, 1969 – 1983 (7 terms).

In 1972, Shirley Chisholm made a symbolic bid for the Democratic presidential nomination with the slogan, “Unbought and Unbossed.”  She was the first African American whose name was placed in nomination at the convention of either major party for the office of president.

She was the first woman to run a campaign for the nomination of either major party for the office of president.

Shirley Chisholm was born 30 November 1924 in New York but spent seven of her early years growing up in Barbados with her grandmother. She returned to New York and her parents in time to study at Brooklyn College. She met Eleanor Roosevelt when she was 14, and took to heart Mrs. Roosevelt’s advice: “don’t let anybody stand in your way.”

Chisholm worked as a nursery school teacher and director of a nursery school and child care center after graduation from college, then worked for the city as an educational consultant. She also became involved in grassroots community organizing and the Democratic party. She helped to form the Unity Democratic Club, in 1960.

Her community base helped make possible a win when she ran for the New York State Assembly in 1964. In 1968, Shirley Chisholm ran for Congress from Brooklyn, winning that seat while running against James Farmer, a veteran of the 1960s Freedom Rides in the south. She became the first black woman elected to Congress. She hired only women for her staff. She was known for taking positions against the Vietnam war. for minority and women’s issues, and for challenging the Congressional seniority system. In 1971, Chisholm was a founding member of the National Women’s Political Caucus. When Chisholm ran for the Democratic nomination for president in 1972, she knew that she could not win the nomination, but she nevertheless wanted to raise issues she felt were important. She was the first black person and the first black woman to run for president on a major party ticket, and the first woman to win delegates for a presidential nomination by a major party. Chisholm served in Congress for seven terms, until 1982. In 1984, she helped form the National Political Congress of Black Women (NPCBW). She taught, as the Purington Professor at Mount Holyoke College, and spoke widely. She moved to Florida in 1991. She briefly served as ambassador to Jamaica during the Clinton administration.

Shirley Chisholm died in Florida on 1 January 2005 after a series of strokes.