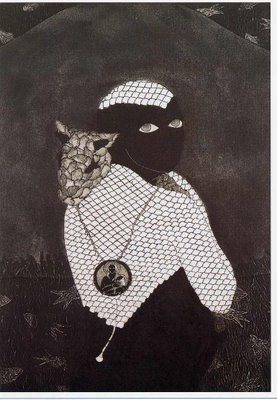 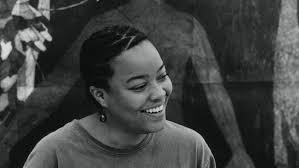 Ayón (1967-1999) was a incredible Cuban printmaker who specialized in the technique of  collography.   She is known for her spectacularly detailed allegorical collographs drawn from the Afro-Cuban secret,  men-only society of Abakuá.  Her work is largely monochromatic, consisting of dark silhouettes and ghost-white figures with oblong heads and empty, almond-shaped eyes. She was born in Havana, Cuba in 1967 and died in 1999 by suicide. 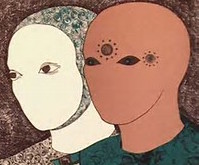 Cuban artist known only recently in the U.S. and woefully underrepresented on Wikipedia.The following is based on an entry I wrote and  published there.

A central theme of Ayon’s art is the mythology of Abakuá, a secret, exclusively male association. The fraternal association began in Africa and was brought to Haiti and Cuba through slave trade in the 19th century. Ayón researched the history of Abakuá extensively, with special emphasis on Princess Sikan, the only female figure in the religion. According to a central Abakuán myth, Sikan once accidentally captured an enchanted fish, which imparted great power to those who heard its voice. Upon taking the fish to her father, he warned her to remain silent, never speaking of it again. She did divulge the information to a leader of another trip, however, and was sentenced to 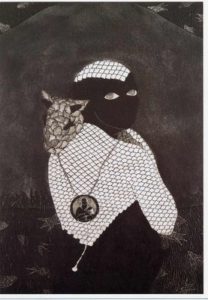 death as her punishment. Imposed silence is major theme throughout Ayon’s work, as evident in the lack of mouths in all of her figures. Ayón was the only prominent artist to devote her art to the Abakuán society. Because the society had very 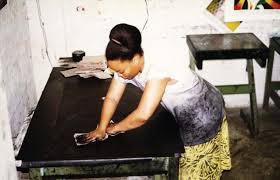 few visual representations of itsmyths, she was free to create her own interpretations. Numerous Abakan rituals are represented in her colographs, many of which draw on Christian as well as Afro-Cuban mythical traditions. This was in sharp contrast to the atheistic anti-religion position of the government Cuba at the time. Known as a master of collography, Ayón perfected the technique by painstakingly attaching materials of widely differing textures (e.g.vegetable peelings, bits of paper, acrylic and abrasives) to a cardboard substrate. The resulting elaborate collage was then run through a hand cranked printing press. The resulting prints were spectacular.  She often painted or carved these images. creating intricate patterns and embossments that added even more depth, texture and relief. An example of her exceptional detail is (Untitled, (Sikan With Goat)) for which she cut and placed hundreds of pieces paper on cardboard to represent individual scales on a figure of Sikan.Her later work was very often large, almost human in scale. To create these prints she joined as many as 18 sheets together.

Ayón is best known for working mainly in black, white and shades of grey. In these prints stark and haunting white figures are dramatically contrasted with dark images and backgrounds. Notable examples are “Longing” (1988), “Resurrection” (1998) and “Untitled (“Black figure carrying a white one”) (1996) She did use vibrant colors in some early work and studies for new prints. A notable example is La Cerna, the study of which portrayed bright pink, red, yellow and green figures. Other examples of bright colors early in her career are “Nasako Began” (1986), “Syncretism I” (1986) and “Careful Women! Sikan Careful!! (1987).

Ayón sometimes mixed images the Abakuán and Christian religions, for example “Giving and Taking” (1997). In this work she depicted a Christian priest or saint with a white halo and a red robe next to an Abakan figure with a black diamond behind his head and clothed in black. She also replaced men with female figures, for example in La Cerna where she portrayed some of the disciples at the Last Supper with females. She also replaced Jesus with the image of Sikan. By raising the importance of women and depicting them is such controversial ways, her bold work defied the society of Abuka, if not the Cuban government itself.