On this May Day, I am thinking about Ms. Fannie Lou Hamer. Reflecting on her unflinching courage and fierce determination to dismantle white supremacy. Considering her commitment to justice in the face of vicious racism, brutal personal attacks, and indifference of so-called white allies in the 1960s. A true super-heroine, Ms. Fannie Lou Hamer battled and survived — for a time — the precariousness of living while black in America. 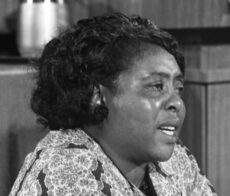 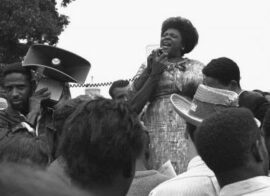 One of her well-known quotes “Nobody’s free until everybody’s free” seems particularly apt on May Day aka International Workers Day.

Although the significance of May Day has been intentionally coopted by the American Labor Day holiday, working men and women in the late 19th and early 20th century rallied and organized for justice against a pitiless and powerful oppressor – rapacious industrial global capitalism. This structural oppression ensures the accretion of power and money to a few elites by promoting hatred and bigotry among the oppressed. We see today across Europe and the US the toxic waste/wake of post-industrial global capitalism: decimated communities are encouraged to hate and fear/blame “the other” instead of the monied elite class for their economic peonage.

This strategy of divide and defeat by pitting oppressed groups of people against each other depends upon the pervasiveness of structural oppressions by race, gender and class; as a result, the only way to feel “free” is to feel that someone “other” is below you. Clueless pundits, politicians and journalists exclaim in disbelief at the success of demagogues in so-called western liberal democracies – failing to see how fear and hate can be so easily be inflamed by scoundrels seeking power during times of socioeconomic distress and disruption.

Ella Baker, recognized as one of the most important African American leaders of the 20th century and well-known not only for her critiques of racism in American culture, but also for her critiques of sexism and classism within the civil rights movement, mentored movement leaders and activists with this guidance: “One of the things that has to be faced in the process of waiting to change the system, how much we have to do to find out who we are, where we have come from and where we are going. In order to see where we are going, we not only must remember where we have been, but we must understand where we have been.”

Angela Davis incisively and instructively diagnoses: “We live in a society of an imposed forgetfulness, a society that depends on public amnesia.”

In little more than two years, we have forgotten what happened in 2016 Presidential election – a race characterized by fomenting fear and violence, brazen continual lying, trumpeting white supremacy, degrading black and brown people, proudly owning misogynist behaviors; and accompanied by the mainstream press manufacturing equivalence between the crook-conman-thug-TV-personality-narcissist-candidate and the white-woman-mainstream-democrat-experienced-qualified-candidate. And oh yeah, we have forgotten the targeted voter suppression (wait, who were those targeted voters?).

Now, incredibly, instead of damning/calling out the Republican approach to immigration as nationalistic and white supremacist, many mainstream Democrats have apparently decided to claim that they also care about “immigration problem at the border.” Where/ who are political leaders with the courage of Fannie Lou Hamer, the wisdom of Ella Baker, and the boldness of Angela Davis!? This utterly despicable administration with its republican quislings have used barbaric tactics that violate every human rights norm to create a disastrous situation for the purpose of distracting attention from economic inequities thriving under post-industrial capitalism. No courage, no wisdom, no boldness…

This amnesia and ignorance by choice contributes to the ongoing malevolent dominance of 21st century post-industrial capitalism in America. Pundits, politicians, big money, and media folks are enthralled with the latest crop of white men – the old jovial one, the older crabby one, the young gay cool one, the middle-aged-reformed-bad-boy-cute-clueless one… Oh yeah, latest white male to throw his hat in the Presidential ring claims: “if we just can get rid of evil rude orange-haired one, then we can return to good polite bipartisan politics!”