That so many people will suffer so much in the richest country in the world reveals once again the stunning institutional inequities driven by white supremacy, misogyny, and unfettered capitalism.  Movement leaders and public health activists are organizing to demand that this pandemic moment be wielded to tear down these structural intentional injustices and to call out these inequities as human rights violations. Dispatch #63 from the War on Women

When Zoe called 911 she could hardly breathe — sick at home with a fever, cough, and shortness of breath for nearly a week. Days earlier, she had gone to urgent care, worried she had signs of COVID-19, but the clinic was short on tests and treated her for an asthma attack instead.  The EMTs were convinced it was a panic attack, not COVID-19. One of them sat with Zoe asking her questions to help her calm down. Asked about her long-term dreams and goals, she replied through labored breath, “My goal is not to die today.” https://theappeal.org/black-women-coronavirus-healthcare/

Two days later Zoe got herself admitted to Brookdale Hospital and was almost immediately placed on a ventilator. After a concerted effort by family, friends and Wellesley College alumnae (Zoe graduated Wellesley Class 2011), she was transferred to Mount Sinai to receive ECMO therapy, an advanced form of life support that can give lungs time to heal.  Zoe died on April 27th.

Growing up in impoverished East New York/Brooklyn with benighted public schools along with a powerful sense of community and family, she became the first in her family to go to college aided by Questbridge.  In a 2015 interview posted at WellesleyUnderground you can read Zoe’s recounting her journey as a young black lesbian, her determination to have her powerful voice, her commitment to staring down white supremacy and misogyny, her plans for a novel, her strategies for how to get more credibility as a self-described ‘poor queer black woman.’ https://wellesleyunderground.com/post/126629682057/wellesley-writes-it-interview-with-zoe-rana 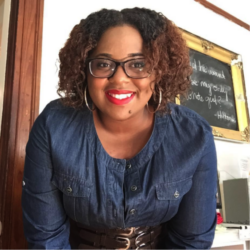 So, yeah, Zoe was living her stirring and remarkable dreams and goals, plans that did not include dying from COVID-19 in 2020.  Her small piece of privilege created by being a Wellesley College alumna was not enough to save her – this poor queer black woman living and teaching in her old hood…. this amazing young woman lost to us in this world that needs such women so very much.

Although I didn’t know Zoe, as a Wellesley Class of 1974 sister, I am struck to the quick by out-raged sorrow and piercing heartbreak…how terribly much she will be missed.

Zoe talking truth to power in 2015 about women of color pursuing MFA programs after completing her MFA at UMass:

In the past few months, I’ve actually spoken with a few women of color who are in various places of the MFA career–applying, thinking about applying, accepted, trying to decide where to go.  The best thing about completing an MFA, if you receive funding, is the time you have to write. Unless you’re independently wealthy, there are very few times in your life that you’ll be able to shut out the world and be paid–as little as UMass did pay–to write and take classes with people who we have to hope are equally committed to producing something great.

But like I’ve already said, the academy wasn’t built for us, and even if they’ll wine and dine you after you’ve been accepted–because having brown kids in the class makes everyone look good, mostly them–no one will give a fuck about you once you get there. You’ve gotta come prepared to deal with the magic of being surrounded by people who also like art but also people who exhibit a mind-boggling level of privilege in a system that perpetuates that privilege, privilege you don’t have, because you’re not a man and you’re not white.

There is a marked lack of safety in being a woman of color dedicated to creating art in white spaces. The time I spent completing my MFA was a period of physical, sexual, and emotional danger, which isn’t indicative of how someone else’s experience may go; this is just what happened to me.

If you do decide to attend an MFA program, the most important thing you can do is make the commitment to take care of yourself. No one else will. Remember: no one needs an MFA to write. https://wellesleyunderground.com/post/126629682057/wellesley-writes-it-interview-with-zoe-rana